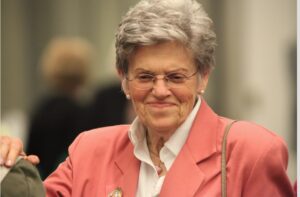 Over 20 years ago, a friend gave David DeLuise a gift certificate for a massage from Kevin. That was the beginning of a friendship that spread through two families. Kevin not only met David, his then wife and two adorable daughters – Destefano & Dylan- but soon he was introduced to his father Dom who was as warm and as funny as you imagine. Kevin was also introduced to Dom’s wife and David’s mother Carol, who was a Broadway and movie actress with her own long and fascinating career. I refer you to “Blazing Saddles” where Carol played Harriett Johnson.

In addition, Carol was a talented artist, a passionate supporter of the arts in education, and a lover of theater- which she and Kevin attended together. One time they got lost in the hills of San Diego looking for a theater and finally stopped at a fire station where the fireman pulled down their wall map of the area to give them directions. 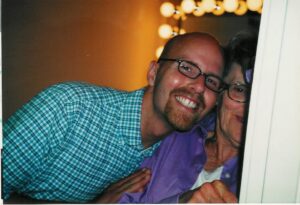 Carol was originally from New Jersey, so she and Kevin bonded over that and so many other shared interests. To meet one DeLuise is similar to meeting one McQuarrie, it menas you are soon introduced to them all. And so it began. Eventually I was brought into the fold as well as my mother Carole, whom Carol DeLuise referred to as “Carol with an e.” When any of our family was visiting Los Angeles, they were welcomed into the DeLuise home with open arms and hours of stories, food and laughs.

When Kevin passed, Dom and Carol were incredibly supportive of me and the start of the Elixir Fund, but I also spent time in their home, just being with their family.  I even accompanied Carol to theater (fortunately, we did not get lost on the way). 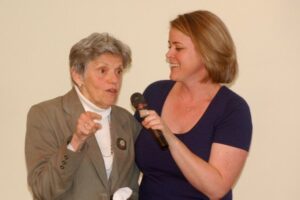 Carol with Meg McQuarrie at our east coast event.

After Dom passed, Carol continued her unwavering support of me and of the Elixir Fund, attending all of our events in Los Angeles and even attending a few in New Jersey. She, along with David, became honorary board members. I cannot being to express to you what a warm, unassuming woman Carol was. My mom often said you felt like you were just having coffee with the neighbor next door. However, this neighbor, in addition to the traditional stories of the antics her sons got in to when they were young (and not so young) she had wonderful stories about the early days of Broadway, she had photos lining her hallway with presidents and a caricature by Buster Keaton that he gave her when they were in a play together. She also volunteered her time reading for the blind and was a regular at pilates. Carol loved to go to lunch and was so excited to hear all about what was going on your life.

Carol passed away on November 1 leaving behind quite a legacy in her three sons Peter, Michael & David; her three grandchildren Destefano, Dylan and Jake, and countless of family and friends who were blessed to have known her.

You can read more about Carol and her very well lived life here.

Carol with her sons David & Michael