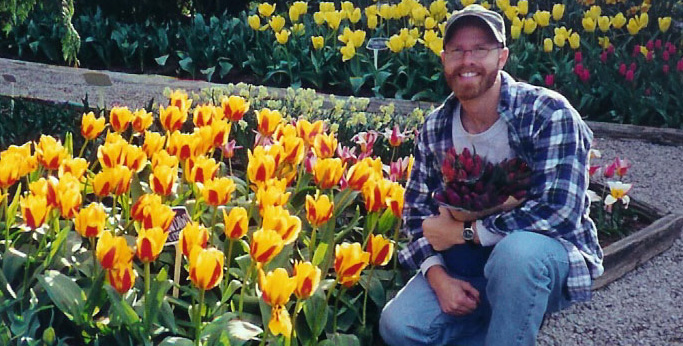 It’s that time of year again. Spring is on the horizon, and we are marking our nineteenth anniversary. The Elixir Fund Anniversary is bittersweet. Founded in honor of Kevin McQuarrie, it marks the anniversary of his death, but it also marks the beginning of all that he inspired. We began with a mission to pay forward the kindness that not only Kevin received, but also his family and friends. We are honored, so many years later, to be able to continue to do so.

It poured rain on the day that Kevin died. A rain that was uncommon for Southern California. The rain seemed fitting for how we were feeling that day. Then a friend said, “I just keep thinking of Kevin’s song ‘Summer Rain’ and the line ‘summer rain calling me home again.'”

A few months later I was driving through the mountain pass heading from LA to San Francisco, one of Kevin’s favorite cities, and I saw that the mountains were covered in wildflowers. Again, a sight not always common in Southern California, that was made possible, partially, by the tremendous rainfall that happened on the day that Kevin died. There was some of the beauty that resulted from a very sad day. That is how I see the Elixir Fund, the beauty made possible by Kevin’s life and his experiences, that in turn impacted so many of us.

I do not continue with the Elixir Fund out of a sense of duty to my brother. I know he would be fine if I set this down and followed any other passion if it made me happy. However, I am extremely fortunate that this is my passion. My job allows me to bring comfort to others, sometimes in a big way, but often in very small, but very meaningful ways. Sometimes, just hearing a voice on the other end of the phone or getting a reply to an email request is enough to let people know we- that includes all of you reading this- are here to support them, and they are grateful.